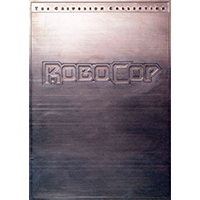 Criterion is known for their top notch dvd versions from classic movies. RoboCop made into the Criterion catalogue in 1998 and was presented in its original, director's cut version which had never been released before, not even by Orion / MGM.

Along with the director’s cut of the film, the Criterion DVD also features an exclusive audio comentary from Paul Verhoeven, producer Jon Davison, writter Ed Neumier and RoboCop expert Paul Sammon, along with a film-to-storyboard comparision and an illustrated issay on the making of the film.

The Criterion DVD is possibly the closest you will get to the original picture when it comes to colors and lighting. Because of that it shows a less polished picture quality if compared to the later remastered dvd’s and blu-rays. Still an interesting version if you want to watch the movie as close as possible to its original release.

MGM took advantage of the hype surrounding the 2014 remake and re-released the original 1987 movie in blu-ray format featuring a new, remastered 4k transfering. To this date, this blu-ray remains as the definitive version of the movie as it features the best picture quality and over 2 hours of extra material, including storyboards, deleted scenes, documentaries, audio comentary and a previously unreleased Q&A with the filmmakers and cast.

Released as a double dvd to celebrate the RoboCop 20th anniversary. The first disc features the original theatrical version while the second one features the extended director’s cut plus extra contents, like documentaries, deleted scenes, audio commentaries and featurettes.

RoboCop 2 never received the collector’s edtion treatment by MGM but fortunately that changed when the guys at Scream Factory acquired the rights to release their own Blu-Ray version in early 2017. The SF Collector’s Edition not only presents the movie in a new 2k remastered version but features lots of unreleased materials such as featurettes, behind the scene footage, interviews with cast and crew, audio commentary and more. If you are a RoboCop 2 fan, skip the MGM blu-rays and grab this one: The new 2k scan not only has the best image quality but also presents the movie with more accurate colors, a slightly darker picture making it closer to the film's original picture style.

If you belong to the group that somehow managed to turn a blind eye on RoboCop 3's countless problems and thinks the movie is ok or even good, this blu-ray is for you. Packed with extras, the Scream Factory RoboCop 3 Collector's Edition features exclusive new interviews, featurettes and audio commentaries.